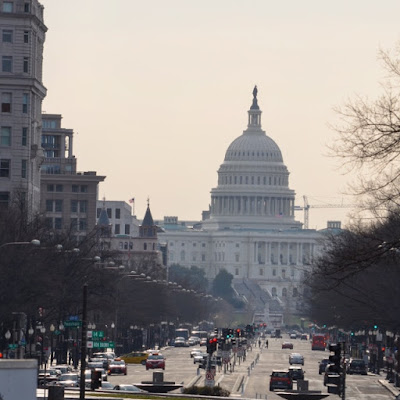 Washington, D.C., formally the District of Columbia and commonly referred to as "Washington", "the District", or simply "D.C.", is the capital of the United States.
The signing of the Residence Act on July 16, 1790, approved the creation of a capital district located along the Potomac River on the country's East Coast. The U.S. Constitution provided for a federal district under the exclusive jurisdiction of the Congress and the District is therefore not a part of any state. The states of Maryland and Virginiaeach donated land to form the federal district, which included the pre-existing settlements of Georgetown and Alexandria. Named in honor of President George Washington, the City of Washington was founded in 1791 to serve as the new national capital. In 1846, Congress returned the land originally ceded by Virginia; in 1871, it created a single municipal government for the remaining portion of the District.
Washington had an estimated population of 681,170 as of July 2016. Commuters from the surrounding Maryland and Virginia suburbs raise the city's population to more than one million during the workweek. The Washington metropolitan area, of which the District is a part, has a population of over 6 million, the sixth-largest metropolitan statistical area in the country.
The centers of all three branches of the federal government of the United States are in the District, including the Congress, President, and Supreme Court. Washington is home to many national monuments and museums, which are primarily situated on or around the National Mall. The city hosts 176 foreign embassies as well as the headquarters of many international organizations, trade unions, non-profit organizations, lobbying groups, and professional associations
(Thanks Wiki)
Only a few hours from NYC is our nation's capital.  Depending on how you drive and at what time, it can be 4 hours or 9 hours, I suffered the latter.  Not anyone in particular's fault, just a combination of construction, curiosity, and bad driving.  Such is life.
Bringing the entire family to Washington D.C. was a great choice.  It is never a bad idea traveling with people older, wiser, and who just have more patience.  There are things I can teach my children about D.C., but there is always someone who will know more (or just ask the right questions to the people who know more).  There are hotels a plenty in the city as you may guess having to attend to the constant influx of travelers as vacationers as well as government business.  With all the hotels, you need places to eat.  That isn't a problem at all.  Seriously, everything ranging from fast food, food trucks to expensive, "gourmet" restaurants where you'll probably sit next to a dignitary or an ambassador if you feel like spending $30 for a salad.  Yes $30 for a salad.
When traveling with small children like I do many many times, the gourmet places usually don't have chicken fingers or simple cheeseburgers.  I can always satisfy my travel buddies with pizza! What city in the world doesn't have some sort of pizza? There are probably a few out there, but who's really counting.  Right on K street between 16th & 17th streets you'll find Fuel Pizza and wings.  With locations throughout D.C., NYC and North Carolina they offer pizza by the slice or pie along with chicken wings with an array of sauces to satisfy the masses.  Being from NY, I know pizza.  It was edible.  No one got sick so thats a plus.  With a name like Fuel, you would expect hot sauce things and items on the menu to get your heart racing, but in actuality they had great decor of an aging garage and gas station.  Communal tables where you sit next to anyone and everyone and get to see the antiques throughout the place.  It was a nice experience for our first meal in D.C. 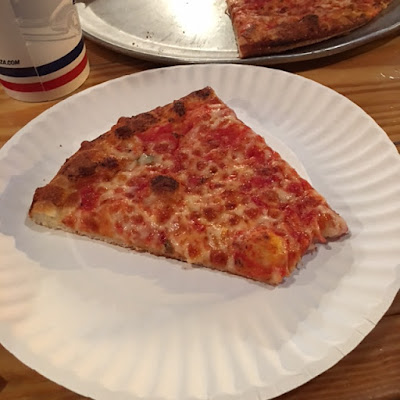 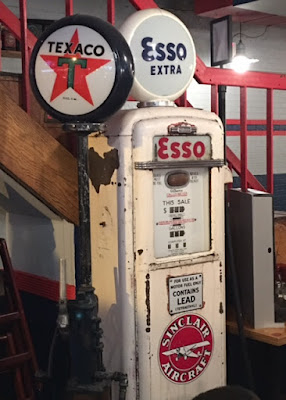 When I travel, I like to find hotels that offer breakfast.  This way, it makes going about the day easier without having to find a place to eat.  Hotel breakfasts can be hit or miss.  I was lucky to hit this time around.  Not just runny scrambled eggs and toast or cereal, my hotel had this: 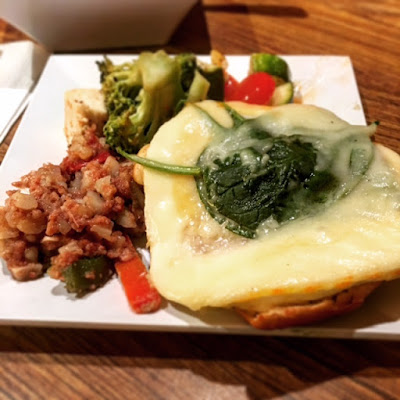 Fried egg on Croissant with baby spinach, hash browns and mix vegetables and tofu. Needless to say we left happy and full that day.

We were there to do the "tourist thing".  See the monuments, the buildings, where laws are made (sometimes broken).  I try to educate my children the best I can wherever we go.  The nation's capital is one of those places that education is never a problem.  There is so much to see and share.  Most of the monuments are for reasons future generations just won't understand.

Take the Vietnam War memorial wall.  Younger generations just don't understand the impact this has had on this country.  Whatever your belief is on the war is irrelevant.  We can all agree that this country lost many of its children during that time and for no good reason.  The nation's sons did not volunteer for it.  They were drafted and told to fight a war they knew nothing about.  Over 50,000 soldiers didn't come home.  Standing in front of their names watching families cry as they found the name of their loved one, sometimes for the first time.  Grandchildren paying their respects to their grandparents.  Sons saying hello to their fathers.  Wives kissing the names of their husbands.  I held back tears as I explained to my own children what this wall meant.  I wasn't even alive for it.  A few more months and my father may not have been home to make me what I am today. 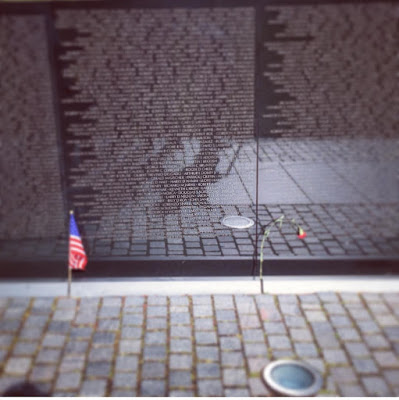 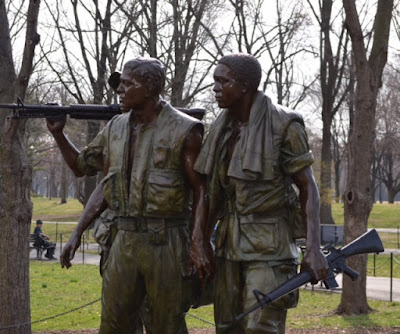 Now, there are the monuments that everyone knows, they are iconic.  The Washington Monument (ironically erected even though President George Washington did not want a monument), the Lincoln Memorial for President Abraham Lincoln. These places are fantastic architectural and artistic creations.  Our first president and our president who fought for freedoms of all races are immortalized  in a single view of each other.  If you are lucky you can see the Capitol building behind them all looking west to east. 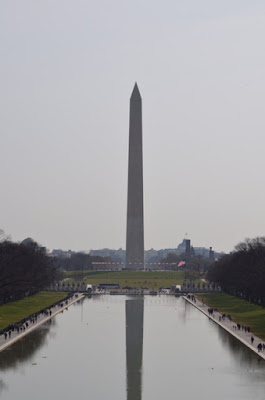 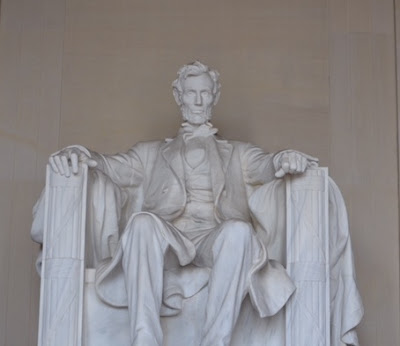 Now D.C. isn't just monuments and politics.  The city is full of art and museums.  Most of the museums are free so get there early as there will be lines to get in.  There are even parks dedicated to sculpture and gardens for an array of beautiful flowers.  There is really something for everyone if politics isn't your fancy. 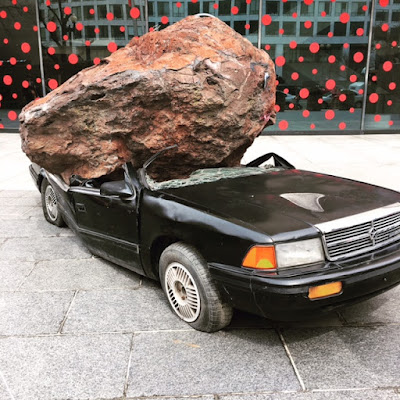 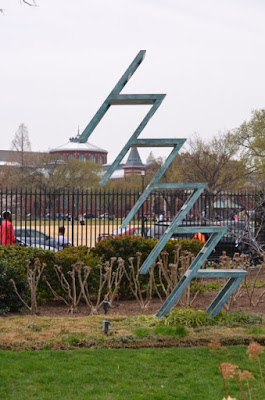 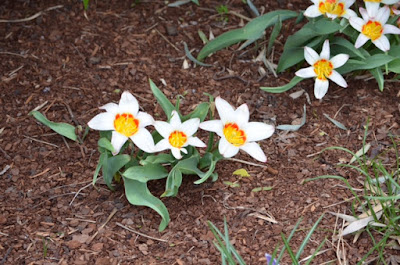 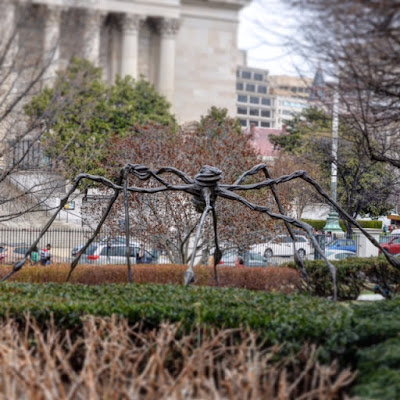 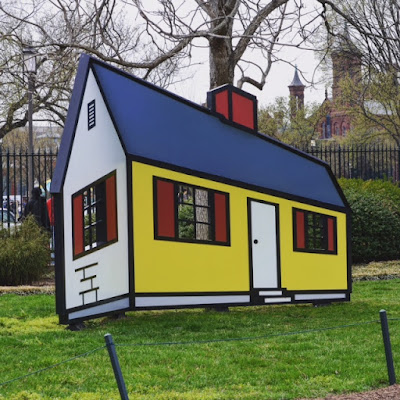 Also, around spring time, D.C. hosts the Cherry Blossom festival as there are plenty of cherry blossom trees throughout the city.  This year however, with the wacky weather we were having, the cherry blossoms didn't get to really show their colors and blossom as much as in the past.  Some trees were showed up for the event and didn't let the thousands of visitors down while other trees just slept in. 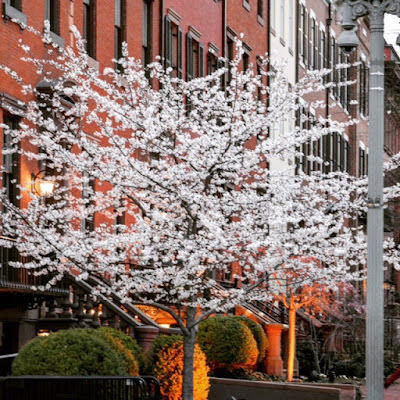 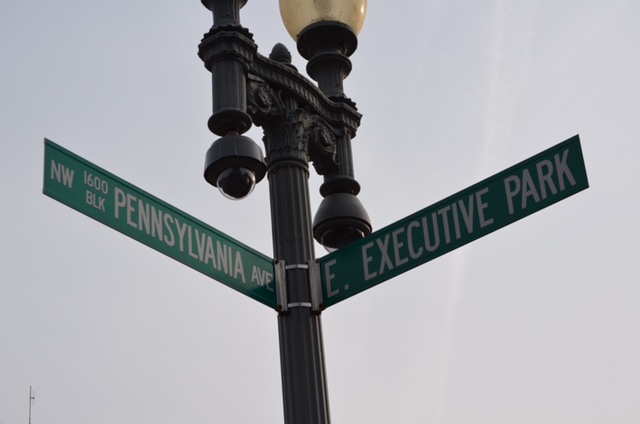 Right outside the White House

Our last dinner in Washington D.C. didn't need to be memorable or even fancy, it just need to be good.  After walking around for over 5 hours, climbing stairs and hills from one side to the other, we just wanted to eat and sleep.  We found a small little pub called Post Pub.  It is exactly what the name says.  Its a pub.  A bar.  Some tables and booths and a crowd having many a drinks as early as 5pm on a Saturday.  Located on L street between 14th and 15th streets, the Post Pub is a retro pub paying homage to the times of the great depression and forwards.  Antique bar signs and photos cover the walls of the dimly lit eating area giving patrons something to look at and adore before chowing down on typical pub food.  However this place is not typical.  Yes there are cheeseburgers, french fries and chicken strips with bacon, but a pulled pork sandwich, generous fish and chips, various sizes of steak cooked to perfection with plenty of sides just make this place something special.  The food was GOOD.  not good for a pub, but good for a restaurant.  With a full bar and plenty of beer on tap with specials, you can definitely be comfortable spending some time in this place.  I brought my young children in before 6ish so it wasn't too bad for them.  Hey they were there for the food.  Our server, waiter, employee guy, who I just realized I never got his name was incredibly friendly and was nice enough o talk to us about the history of DC and what life is like in the Nation's Capital.  With that said, I will not be moving there anytime soon! 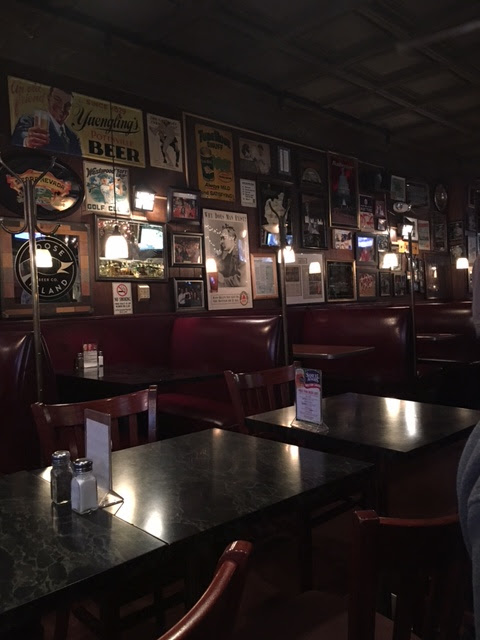 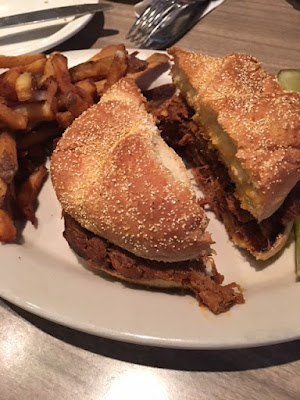 So if you decide to visit the nation's capital, I recommend the Hyatt on K street for your hotel (simple but great location) and Post Pub for a meal or a few beers or both.

It's all about life so travel, eat, and live!!