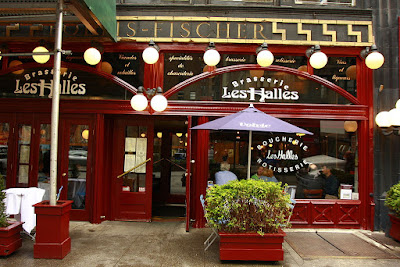 Brasserie Les Halles is a French brasserie style restaurant located on 15 John Street (between Broadway & Nassau Street; in the Financial District) in Manhattan in New York City.  Previous locations were on Park Avenue South in Manhattan, in Tokyo, Miami, and Washington, D.C. Carlos Llaguno was the executive chef, his predecessor having been author and television host Anthony Bourdain.

The restaurant serves simple and classic French dishes such as escargot, foie gras, and steak tartare, which is prepared to order at tableside, and is renowned for its pommes frites. The original Park Avenue location featured a butcher shop that specializes in French cuts of meat. The Park Avenue location is featured prominently in the book Kitchen Confidential by Anthony Bourdain, who also detailed many of Les Halles's recipes in Anthony Bourdain's Les Halles Cookbook. The Downtown New York branch occupies the site of the former John Street Theatre, "Birthplace of American Theatre."  The restaurant is named after Les Halles, the historic central wholesale marketplace in Paris, France.
The Park Avenue location of Les Halles closed in March of 2016. The Washington, D.C. location of Les Halles closed in mid-November 2008 following a fifteen-year run. Owner Philippe Lajaunie cited difficulty obtaining a new lease as the reason. The Miami location is now closed as well. 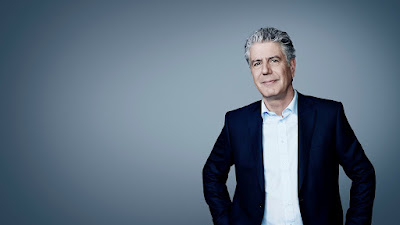 
Los Angeles, officially the City of Los Angeles and often known by its initials L.A., is the second-most populous city in the United States (after New York City), the most populous city in California and the county seat of Los Angeles County. Situated in Southern California, Los Angeles is known for its mediterranean climate, ethnic diversity, sprawling metropolis, and as a major center of the American entertainment industry. Nicknamed the "City of Angels", Los Angeles is a global city with a diverse economy in entertainment, culture, media, fashion, science, sports, technology, education, medicine and research. Los Angeles includes Hollywood and leads the world in the creation of television productions and recorded music; it is also one of the leaders in motion picture production. (Thanks Wikipedia)

The city of Angels! Known for Hollywood stars, beautiful people, and making movies. Home to the rich and famous! Just like all other cities, Los Angeles has regular people doing the jobs that make a city move and grow. The ones who don't live in mansions or drive a Bentley, but take the bus to work and work they do - hard.

This isn't my first time to Los Angeles. I call it my second home because it is the city I have visited the most in all my travels. For close to 20 years I have been coming out west from NY for a taste of something different. The people, the places, and of course the food.

We can skip the typical fast food joints as they are pretty much the same everywhere. Your IHops, McDonalds, Burger Joints, Denny's, Chic-fil-A and the such. In any of my travels, you will know that I am a huge fan of PHO. A vietnamese beef soup that just hits the spot no matter what is going on in life. Los Angeles was no different. I found and enjoyed a nice bowl of pho from Trio House at 3031 S. Figueroa St. It was unfortunately to go as one of my sons fell ill and we had to leave. However before that, my family was able to enjoy the splendid of Trio House with a strawberry/bananas smoothie and chicken bulgogi (grilled boneless meat topped with sweet korean teriyaki sauce, fried egg and homemade kimchi...photos taken by my son - he's 9). 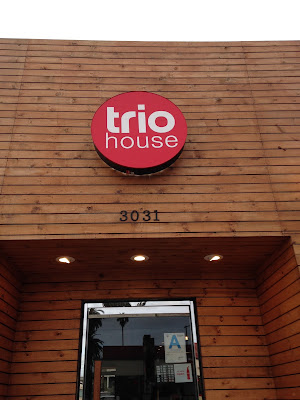 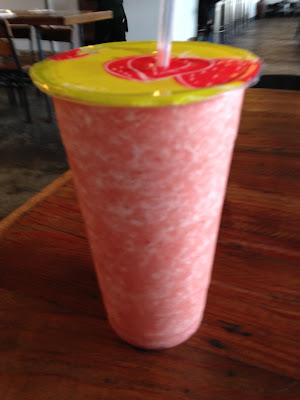 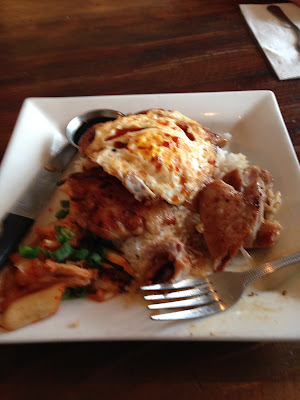 After some getting used to the intestinal fortitude we would need for the west coast, the entire next day was spent with family doing the family thing.  You know, playing Playstation Virtual reality! Or PSVR as is said.  That could make you lose your lunch if you easily moved by motion and such.  Please be careful.  However, I cannot see playing a video game "normally" after spending time playing "IN" the game.  If you don't know what I mean, go find out.  You will not regret it. 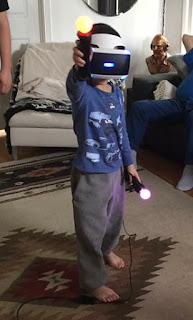 If you aren't as lucky as me to have family in Los Angeles and want to do something with kids, I suggest the California Science Center.  It was about $12 to park for the day and you had access to the entire place (except for the IMAX theater and specialty shows).  Other than that it was free to enter. 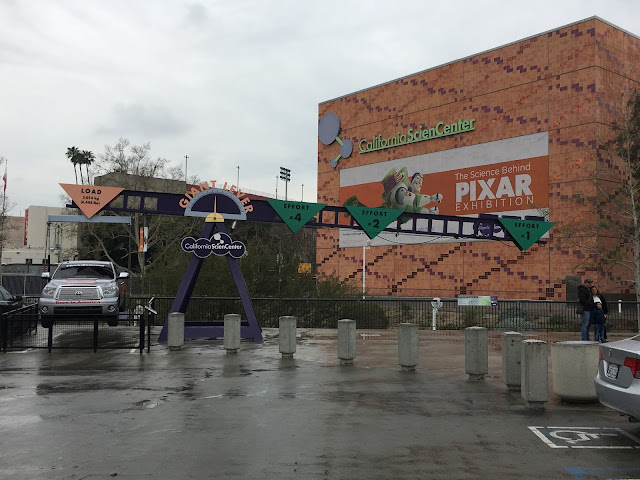 I mean, right on the outside, they teach you about levers, and moment arms and forces.  How cool is this place?!

There plenty of things for the kids to get their hands on and play.  All at the same time they are learning how things work.  The human body, the ecosystems, jet propulsion, physics, etc...you know kids stuff.

When all that cerebral growth is done for the day, you can eat right downstairs.  The entire bottom floor is designated to food (my kind of place).  There is pizza, hotdogs, burgers, sandwiches, tacos and more.  If you're hungry coming in, you won't be going out. 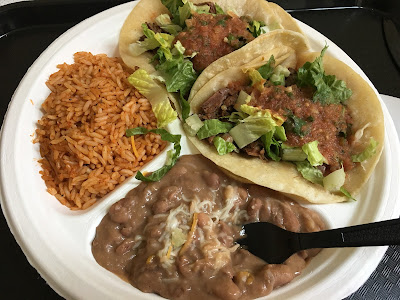 A trip to Los Angeles isn't the same without a stop at the famous Venice Beach. Lined with stores for the aching tourist to shop to their content and food of the quick and greasy kind to aggravate the stomach. It is all worth it. Street performers, skate parks, crashing waves, and the infamous Muscle Beach are only a fraction of what Venice has to offer.

Venice was founded in 1905 as a seaside resort town. It was an independent city until 1926, when it merged with Los Angeles. Today, Venice is known for its canals, beaches, and the circus-like Ocean Front Walk, a two-and-a-half-mile pedestrian-only promenade that features performers, mystics, artists and vendors. Thanks Wikipedia 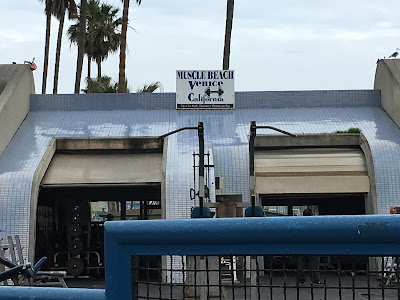 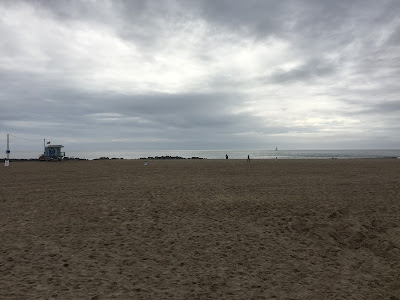 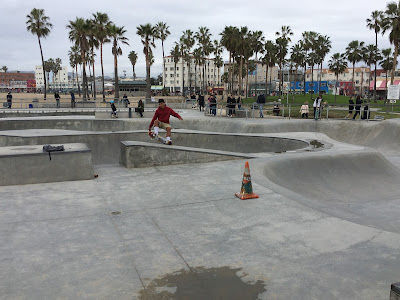 You need a car to get around Los Angeles.  Well you did before Uber and Lyft came into the picture.  Regardless of, sometimes you don't feel like going anywhere.  The idea of just crashing on your bed and passing out sounds like heaven, especially if you've been out and about the entire day.  If you're not staying with someone in the area and are subject to hotel locations near the airport, you might find a place to eat right there.  Where I was, was a place called 1440 Bistro and Bar.  It was connected to the hotel so the commute was fantastic.   It has a full bar and simple American style food from burgers, wings, baked chicken to pasta.  I decided on the Pesto Chicken with, capellini, asparagus, and pine nuts.  It was food.  Nothing special.  Nothing fancy.  Actually it was editable.  Just about it.  Beer selection was minimal and food was overpriced for the quality and quantity.  Now I know for the next time I visit. 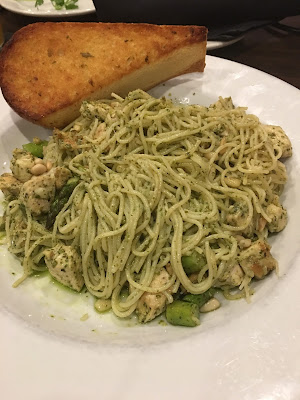 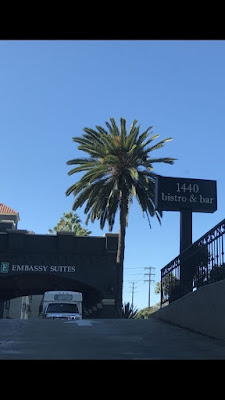 Another favorite hotspot to visit is the Santa Monica Pier.  Featured in many commercials and film productions for its long wooden pier and mini amusement park.  The Santa Monica Pier is a large double-jointed pier at the foot of Colorado Avenue in Santa Monica, California. With an iconic entrance, the pier is popular with residents and visitors as a landmark that is over 100 years old. 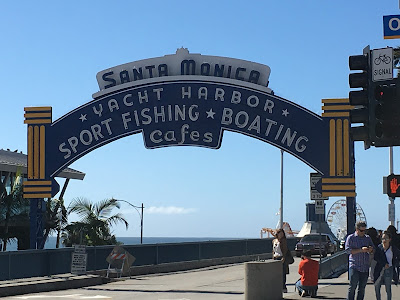 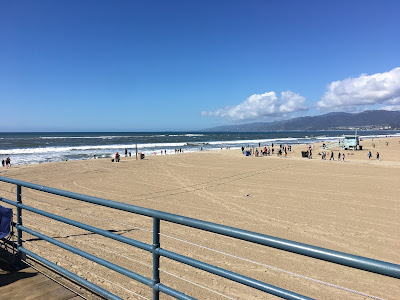 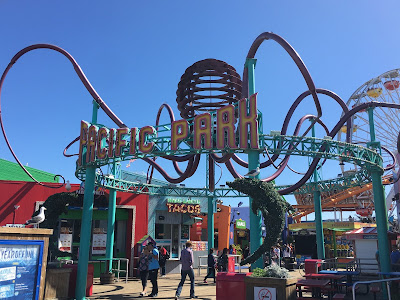 On the pier itself you can find places to eat and drink, but remember you are ON the pier! It will cost you.  A great alternative is to leave the pier for any of the many restaurants, cafes, and watering holes only a few blocks away from the pier entrance.  One spot directly across the streets Del Frisco's Grille  (not to be confused with Del Frisco's Steak house in either NYC or Philadelphia).  This grill is simple sandwiches, soups and salads.  I wasn't in the best shape to eat too much for lunch as I was realing from the night before and the quality of food from 1440, but I digress.  Grab a pair was a choice for me with half of a sandwich/wrap and a small side caesar salad.

Try any Personal Size Flatbread,Quinoa Tacos, 1/2 of a Shaved Prime Steak Sandwich, 1/2 of a Chicken Avocado Salad Wrap served with your choice of a Mixed Greens Salad, Caesar Salad or Cup of Soup.

$14 for this lunch wasn't that bad when you see the portion size.  Oh and you get chips as well.  Can't forget the chips. 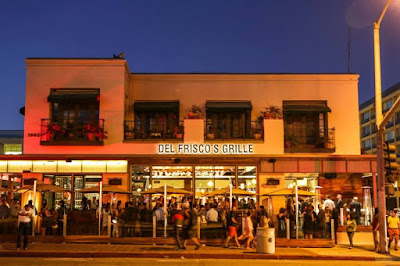 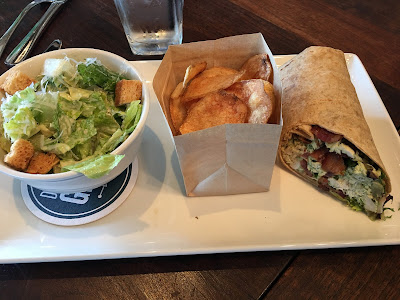 Like I said, you kinda need a car when in Los Angeles.  After the 25 minute drive back to the hotel to relax after being in the sun of Santa Monica for a few hours (actually got sunburn on my head) I was invited to dinner further north and east of where I was.  This time into Hollywood I went.  I was trying to stay clear of the big touristy places like Hollywood Blvd and such, but it was nice to just drive on by and show my kids what everyone else was doing.  I wasn't looking for anything special or fancy for my last night in Los Angeles so I was pleased to arrive at Mel's Drive-in - yes the Mel's Drive-in from American Graffiti.  There are multiple locations for Mel's throughout California but this one was right in Hollywood!  Food was simple diner food with a large selection.  Tuna Melts with fries, sliders and chicken fingers for the kids, big bowls of hearty soup and even items for the vegetarian in the group (if you're into that sorta thing).  Decently priced food that is worth its weight in flavor and portion size.  I know this place is on my list for return meals. 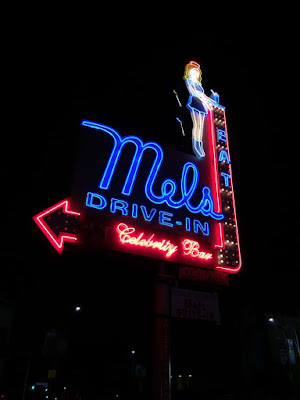 Los Angeles is a large city with a lot to see and do as well as eat.  It is easy to get caught up in the big tourist traps and lose track of what you've done and where you've gone.  Driving in LA is easier than you think, just understand that pedestrians have the right of way most of the time.  Pay attention to signs! Make sure you take in both the sand and ocean as well as Downtown LA a.k.a. the city.  If all else fails and you're not sure what to do, there is always Disneyland and Universal Studios!