The Chemistry of Nutrition 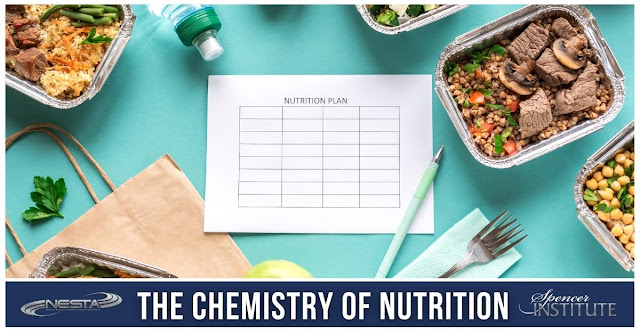 The Chemistry of Nutrition and The Chemical Level of Organization

Atoms are the smallest units of matter that are stable. Atoms themselves are made up of positive protons, neutral neutrons (both in the center of the atom – the nucleus), and negative electrons in regular orbits about the nucleus.

Ultimately, atoms are defined by the number of protons they have in the nucleus (the atom’s “Atomic Number”). Atoms will react with each other by either transferring or sharing electrons, with the ultimate goal of having a complete outer valence shell of electrons – this is the creation of molecules. It can be said that atoms are greedy or lazy when it comes to completing their outer shell of electrons. Some are greedy in that they will take electrons from a neighboring atom. In turn, the neighboring atom is lazy in that it would rather give up its outer shell electrons and drop down to the next full orbital. The atom which gains an electron will become a negative ion (anion) and the atom which loses an electron will become a positive ion (cation). In this case, an ionic bond is formed by the attraction between the two oppositely charged ions.

At this point, one may ask, “why is it important to understand these fundamental chemistry concepts in order to give nutrition recommendations to athletes?” Remember that nutrients are simply the molecules and ions that make up our cells. To truly comprehend how molecules such as carbohydrates, lipids, and proteins function, you must understand their unique structures and how their structures react in one more important molecule (and our other macronutrient), water.

With its unique properties, water is an incredibly important molecule for life. So that begs the question, what are the properties of water?

Of course, this leads us to another question — Why does water have these unique properties? It is due to its shape, its polarity, and its creation of Hydrogen bonds (“1” on image to right).

Water is formed by the covalent bond between an oxygen atom and 2 hydrogen atoms, therefore there is no “net” charge. However, oxygen has a greater electronegativity for electrons than hydrogen. Therefore, there is an unequal distribution of electrons, and a polar covalent bond is formed.

So how does this lead to the unique properties of water? What bond holds water molecules together? The creation of hydrogen bonds. Hydrogen bonds (H-bonds) occur between hydrogen in a covalent bond and a negatively charged atom of another molecule. These are relatively weak intermolecular (between molecules) bonds (approx. 5kcal/mol). Although relatively weak, the bonds are still bigger than room temperature (however, if one raises the temperature to boiling, the H-bonds will rip apart).

Nonpolar molecules (e.g. fats, oils, cholesterol) will not dissolve in water. This is the case for lipids, which are made primarily of C-C and C-H bonds. There are two reasons it will not dissolve in water. First, nonpolar molecules cannot form H-bonds with H20. Second, water would have to order itself around each molecule in what is known as a loss of entropy (chaos or randomness). This organization would require energy.

Amphipathic molecules, Polar and Nonpolar at the same time