External Systems That Effect Your Heart

Control of Heart Rate from Outside the Heart

The heart muscle is unique. It can generate its own action potential without any external stimulation. However, the timing of heart muscle contractions can be altered by external sources. The heart is primarily influenced by 3 extrinsic (external) systems:

One important parasympathetic nerve that innervates many of the thoracic and abdominal viscera (internal organs) is the vagus nerve. The vagus nerve is important because it stimulates involuntary actions of the cardiovascular (breathing and heart rate slowing) and digestive (stomach acid increase) systems.

At rest, the vagus (parasympathetic) response is dominant with a corresponding lower heart rate. As intensity increases toward maximum oxygen uptake, the sympathetic response begins to take over and heart rate increases.

During sympathetic stimulation, the hormones norepinephrine and epinephrine (a.k.a. adrenaline and noradrenaline) are released by the adrenal medulla, on the superior aspect of the kidneys. These hormones increase heart rate and prepare other organs as a response to stress. 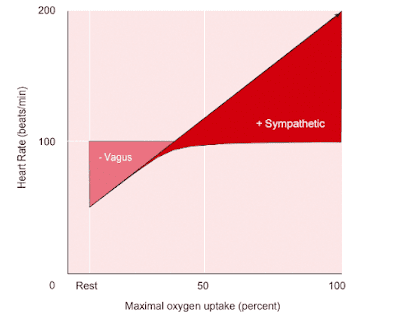