What should TV cooking shows really be about... 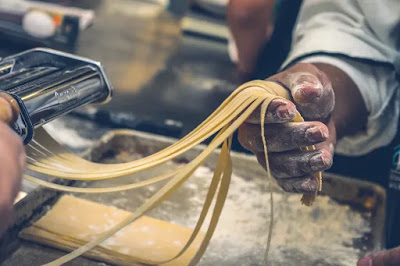 I don't know about you, but sitting in front of my television watching Rachel Ray cook something I'll never eat for 30 minutes isn't my idea of food information and inspiration.  Nothing against Rachel Ray or any "celebrity Chef" that graces the camera for scripts network, but I honestly don't give a crap what any of them are cooking or why they like it.  To be honest, I love the shows that get to showcase various eating establishments and WHY THEY DO WHAT THEY DO as opposed to one chef who is cooking for TV. Hell, I'll even settle for that loud spike haired guy on the Diners, and dives thing he has.  I don't care if you like a certain pepper over another and only use it in your food.  I want to emulate what a local latin cafe does because it speaks to my roots in Puerto Rico. Or how about an authentic Chinese restaurant, who mind you does not serve Sweet and Pungent Chicken or General Tso Chicken (neither are an authentic asian dish), who brings the homeland to a local small town in the midwest.

If your family is involved, you cannot be a run of the mill restaurant.  You have to stick to what family has given you.  That is why I prefer to watch shows like Anthony Bourdain's No Reservations (no longer on air), Parts Unknown or Andrew Zimmern's Bizarre Foods.  These guys not only attack the essence of food in the cities they are in, they go after why that food is so special.  Who brought it there? why is it important? and to be honest, Why are there people even migrating to the area? These types of shows not only give us culinary inspiration for our own kitchens, but for our own lifestyles.  It doesn't take the overpriced groceries at the local "High End" market to make a great dish.  People have been doing it with what is available for centuries and will continue to do so for centuries more.

The idea of great food is arbitrary.  Based on opinion to be honest.  I mean what is a food critic anyway? Someone who gives there opinion on food whether you agree or not.

All I have to say is if something speaks to you, try it.  You never can tell what lies in store for your next culinary adventure.

Until then, get in the kitchen!