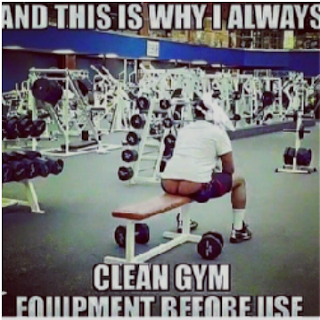 Germs are found in high numbers virtually everywhere in a gym, from the weightlifting bench to the sauna. Sweaty residue on workout equipment, particularly the machines often used by several people in quick succession, such as weights and exercise bikes, provide the moisture that encourages the spread of germs. In a study published by Men’s Fitness Magazine, a quarter-sized site harbored 132 million bacteria, and the average site tested yielded 16 million. On the same area of a toilet seat, you can expect to find just 500 bacteria, according to the study.

Pathogens found on gym equipment can lead to a number of ailments, ranging from minor skin infections, such as pimples, to life-threatening diseases, including meningitis, endocarditis and sepsis. Staphylococcus aureus is perhaps the most serious pathogen found in commercial gyms, as it is resistant to antibiotics.  According to the Journal of the American Medical Association (JAMA), it killed 18,000 people in 2005.

Good hygiene is the best way to prevent the transmission of pathogens around exercise equipment, especially in commercial facilities.  Practice the following precautions when working out:

• Wash your hands thoroughly before and after exercise. After touching weights and machine handrails, try your best to keep your hands away from your eyes, nose, ears and mouth until you can lather up.

• Wipe down the machines and communal yoga mats with disinfectant before and after use. Commercial gyms ordinarily disinfect equipment on a regular basis, but you should not rely on the competence of the staff. It’s also bad etiquette to make the next user swim through a pool of your sweat.

• Bring your own sweat towel, and use it. In fact, it’s better to bring two, as you can place one on machines and benches to protect yourself when you sit down, and use the other to periodically wipe down your body. Don’t trust the towels provided by the gyms, since they are not governed by the same stringent standards that hospitals are.  Hospitals must adhere to strict regulations regarding the temperature at which towels must be laundered.

• Don’t go barefoot in a gym shower or sauna. Human traffic, hot temperatures, moisture, and a lack of sunlight create a perfect environment for many bacteria. Wear flip-flops or water shoes to avoid athlete’s foot, ringworm, and other such communicable conditions. Shoes may also help you avoid slipping on wet tiles.

• Sit on a towel or wear shorts in the sauna to avoid direct contact with the seating, which may harbor bacteria.

• Cover any breaks in your skin with bandages. Even a minor scratch or raw skin can allow the entrance of Staphylococcus aureus, causing a serious staph infection