April 24, 2017
I like to eat.  That should be obvious.  I like to eat, but better yet, I like to cook.  Scratch that, I love to cook.  I wasn't always this way.  I used to be a simple meat and potatoes type guy, or just a hamburger please.  Now I try pretty much everything from Thai, Indian, Russian, African, Mediterranean, and one of my all time favorites - Vietnamese.  Since it is one of my favorites, good for any occasion I focus on a specialty soup.  Whether warm outside or cold, morning, noon, or night - this dish can be consumed and consumed it has!  So without further ado - this journey is about Pho!

Phở or pho is a Vietnamese noodle soup consisting of broth, rice noodles called bánh phở, a few herbs, and meat, primarily made with either beef or chicken.  Pho is a popular street food in Vietnam  and the specialty of a number of restaurant chains around the world. Pho originated in the early 20th century in northern Vietnam, and was popularized throughout the rest of the world by refugees after the Vietnam War. Because pho's origins are poorly documented, there is significant disagreement over the cultural influences that led to its development in Vietnam, as well as the etymology of the word itself.  The Hanoi and Saigon styles of pho differ by noodle width, sweetness of broth, and choice of herbs. 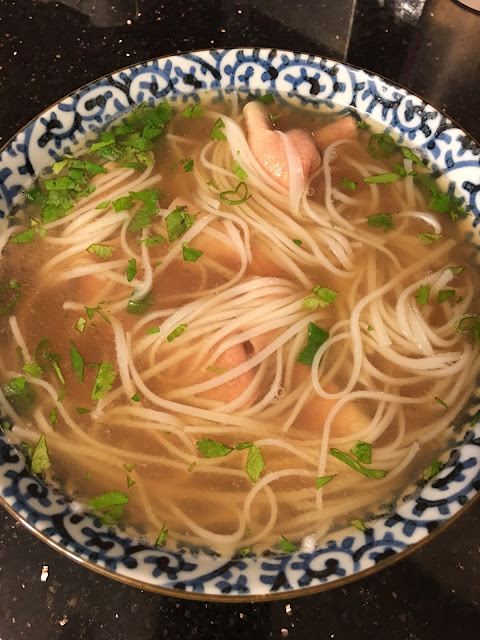 Pho is a very time consuming and laborious task.  You read everywhere that it takes up to 10 hours just to make the broth.  The additives will vary depending on where you are and what your individual tastes are.  The spices also vary.  I decided to keep mine as simple as possible.

I started with about 4-5 pounds of beef marrow bones of various sizes.  As I look back I should have had the butcher cut them up smaller so I can extract more marrow.  I roasted them in a preheated oven of 425 degrees for an hour.  I added an entire yellow onion, cut in half, at about the 15 minute mark to allow it to roast for 45 minutes and char.

All the roasted bones and onion were then added to my stock pot with built in strainer (so useful for this by the way). 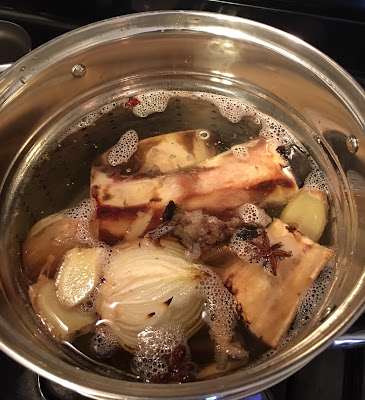 Into the pot with the roasted goodness went star anise, ginger slices, fish oil, and salt.  Brought it to a boil then reduced to a simmer.  Now traditionally I am told that this is to simmer for almost 10 hours or more.  I was hungry and impatient and stopped mine at only 4.5 hours.  I know I know.  It isn't that traditional.  Anyway, a bundle of rice noodle placed into boiling water for 5 minutes, removed and cooled in a bowl.  Adding green onion, cilantro, and slices of raw beef (if you don't want to slice beef thin yourself, you can buy thinly sliced beef from an asian market - typically used for Shabu Shabu or hot pot). 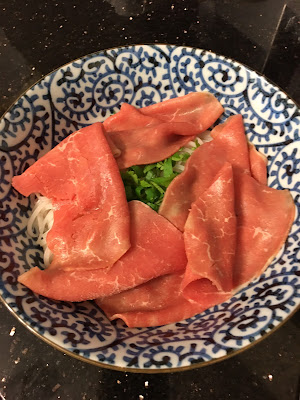 Once you remove the large pieces (this is where the added strainer in the pot comes in handy) you are left with a beautiful broth that now needs to be strained.  I didn't have a cheesecloth so I just used my small strainer and a coffee filter.  Worked magically to remove any and all particulates from the broth.  Once I strained enough for my bowl of goodies, I went to town.  Slowly poured the filtered liquid over the combination of greens, meat and noodles, watching the beef cook and change color under the heat of the broth.  I let it sit for a minute to cook the meat longer as I strained some more broth.

I was impatient and just started eating.  I was so proud of myself that I finally made one of if not the favorite dish I have ever eaten.  It was good.  I mean, for my first time it was really good.  It had flavor.  It had the texture.  Still something was missing.  After devouring the bowl of Pho, I cleaned up.  Then it dawned on me what was missing - basil! That added sweetness of basil really brings it together.  So I put everything away, waiting to go shopping the next day.

When the time came and I had my basil, I pulled out every piece necessary to make the pho.  I was determined to get it really right.  I heated everything I needed, boiled my noodles, added the meat and greens, then poured in the broth.  As the meat slowly cooked I added a few basil leaves and mixed it in.  After a minute or two I was ready.  All I can say is that the basil plus 2nd day broth was the ticket.  I did it.  I was a white guy who successfully made my own pho!  No I didn't cry. 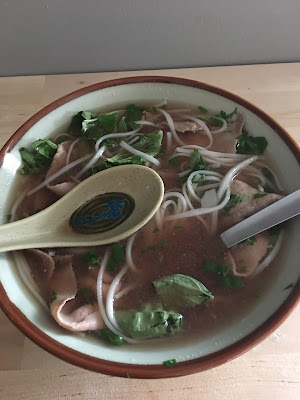 It sounds intimidating and cumbersome.  It is.  It is time consuming and laborious, but incredibly worth it.  If you have ever experienced a beautiful bowl of pho you will know what I am talking about.  If you haven't, I suggest going out and having a bowl before taking on this gigantic task.  You will thank me for it.  Until then, It's all about life so travel, eat, and live!