February 28, 2017
Hell's Kitchen, also known as Clinton (and formerly as Midtown West) is a neighborhood on the West Side of Midtown Manhattan in New York City. It is traditionally considered to be bordered by 34th Street to the south, 59th Street to the north, Eighth Avenue to the east, and the Hudson River to the west. The area provides transport, medical, and warehouse infrastructure support to Midtown's business district.
Once a bastion of poor and working class Irish Americans, Hell's Kitchen's location in Midtown has changed its personality since the 1970s. Since the early 1990s, the area has been gentrifying, and rents have risen rapidly. Located close to both Broadway theatres and the Actors Studio training school, Hell's Kitchen has long been a home to learning and practicing actors. 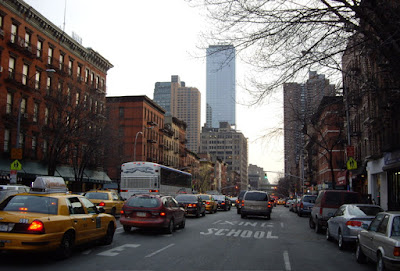 There are plenty of places to eat in Hell's Kitchen.  As the population changes and grows, more and more food establishments pop up.  I had the pleasure of dining at Medi Wine Bar on 9th Ave and 54th street.  It serves a Mediterranean inspired cuisine with a experimentation with new ingredients almost on a daily basis.  The ambience is elegant and welcoming.  Dimly lit with a single candle on the table.  The waitstaff is very attentive and knowledgeable about the menu.  Food was served in decent time without causing a wait for anything.  I tried to order a little bit of everything from the menu so I can experience the full side of the choices from Medi Wine Bar. 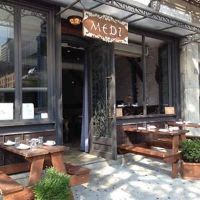 I started with 1/2 dz blue point oysters.  Three (3) of the six (6) were very small.  So consistency in product wasn't there.  However, we are talking about oysters, which is pretty much hit or miss anyway.   It came with lemon wedges, tabasco sauce, and what looked like a custom cocktail sauce which was sweet when added with some lemon squeezes. 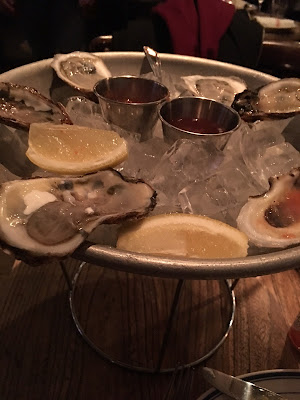 Next, I went with Sautéed Chicken liver bruschetta.  A single piece with large bread that should really have been a little thinner as it was difficult to eat. The chicken liver isn't gamy, but the goat cheese slightly overpowers the bite.  It is tasty with a good balance of caramelized onions, cheese, and chicken liver that made the single piece worth having. 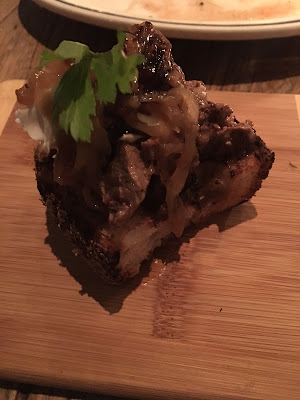 Finally, I ended the meal with Hanger steak with arugula and shaved parmesan. Not the best piece of meat for the price, but this place knows what rare steak means! Nice red color on every slice.  Many pieces of meat and an overly large amount of arugula and large pieces of parmesan cheese shavings. No other sauce or seasoning was needed.  Ultimately the meal was worth it. 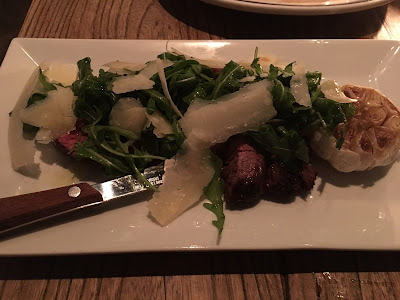 So after a meal like that, you would definitely need a place to work it off.  Hell's Kitchen has a few places for you to get your sweat on.  A popular spot is Mark Fisher Fitness.  When you first look at MFF, either on the website or in person, it looks more like a circus than a fitness center.  Crazy costumes and interesting behavior, but don't let that fool you.  Mark Fisher Fitness is one of the most knowledgeable fitness centers in NY with excellent programming and coaches.  It's just a bonus that they like to have a lot of fun. 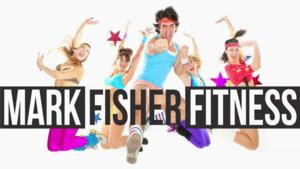 Hell's Kitchen is also home to many bars, lounges, and night spots.  So if you're looking for a place to go after your meal, you are sure to find something within walking distance to wherever you are.  One favorite place is Bar Nine.  Bar Nine is not only a bar, with typical bar grub and drinks, it is also a piano bar.  Every Thursday, Friday, and Saturday evening, you get to see two dueling pianos playing hit songs from the last few decades.  Space is limited for the show so its best to reserve a table for groups of two or more.  If you walk in as a single, there is plenty of room at the bar if you get there early enough.  Otherwise you can stay in the back where the couches are, but you can't see the show from there.  The night can end around 11:30pm or continue until well after midnight.  It all depends on who is playing and how the crowd is enjoying themselves.  Prices are normal for a NYC bar so don't really expect to have discounted drinks or food.  If you decide to reserve a table, there is a two item minimum for each person.  Drinks or food.  Water doesn't count.  It's a great time with great NY people (no matter where you're from). 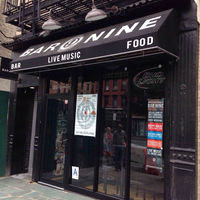